Stella is the gentle lovebug and constant companion! She loves to be with her people, inside or outside, playing or relaxing. Stella is an American Staffordshire terrier mix. She weighs about 50 pounds and is just about 3 years old. She is potty trained, crate trained, and loves to go into her … crate at night to sleep. She is used to being crated when her people have to go out during the day, so she is trustworthy when left alone, but is happiest when her people are with her. If she’s been crated or if you go outside and come back in, she might jump on you in her excitement! Stella’s favorite things include her treats, riding in the car, baths, her black Kong ball, and attention from her people! Her favorite treats are peanut butter Milk Bones and plain old peanut butter. She’ll even take medicine easily if you put it in peanut butter! She also loves birthday cake (though she hasn’t had it often) and will sit patiently in the kitchen while you cook, head tilted, hoping for a treat. She loves to ride in the car with you and will happily load up and would live in that car, as her current mom says. When youre ready to stop and get out, she might hesitate to jump out because she’s wondering if you’re going to get back in and keep going. She loves taking baths and is very used to it. Her favorite toy right now is her black Kong ball, which she will fetch if you throw it, but wont give it back to you. When playing, Stella actually prefers tug of war to fetch! When youre done playing, Stellas mom says she can take the ball right from her mouth and Stella lets it go, no problem. Above everything else, Stella loves attention from her people. The three terms her current mom and dad use to describe her are loving, attention-seeking, and loyal. Stella wants to be with you, wherever you are, and will follow you around the house and inside or outside, just to be with you. While Stella enjoys walks, she doesn’t demand them and will actually be pretty tired after a good long walk. She has a large yard she runs around in and spends a lot of time, 6-8 hours a day, outside with her people in the yard. She almost never barks or growls. She loves baths but has never been in other water (like a lake or pond), so it is unknown if she would enjoy swimming. She currently lives with a cat and does fine with him. She does sometimes get jealous when the cat gets attention and will seek it too, but has not shown aggression toward the cat. She has not been around other dogs much, just a few times when she was younger, and was a little timid with them, but did ok. When on walks, she does not bark or growl at other dogs she passes, though her mom will keep space between her and other dogs just to be careful. When new people come to the house, she can be a bit timid with them. She is usually crated at first, and then will meet newcomers after a few minutes, and has done fine. Stella does have a fear of anything resembling a long stick, like broomstick handles or golf clubs. If she sees her mom or dad holding a broomstick to sweep, she will tuck her tail under and move away from them. She hasn’t shown aggression at all, just an obvious fear and trying to stay away from the stick. They suspect that before she came to them when she was about a year old, she had a bad experience with something like it. Stella has only been around one young, sweet-natured child in her life. She did well, but since it is unknown how she would respond to children in general, it is recommended that she live in a home without children. Gentle, loving, attention-seeking and loyal Stella needs a loving home with time to give her attention, and no other dogs or children. A dog-savvy cat may be okay. She doesn’t need to go on long hikes or need constant physical activity – just your love and cuddles. She is currently being fostered in Houston, TX until she finds the perfect match! Out-of-town pets are cared for by non-local organizations who can make arrangements for the pet to be transported to your area. 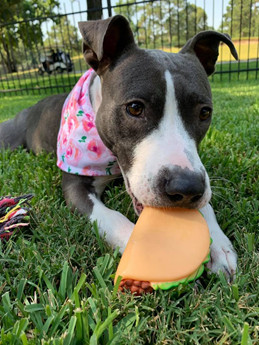 Vaccinations up to date, spayed / neutered