John is in desperate need of another foster family! Due to personal reasons his foster mom must find another place for him to stay. (7/3/2021) Update from John’s foster mom – “We were at the playground today, lots of noise, splash pad, bikes, balls. John was nervous! After walking a few laps I sat … on a bench; the slats were too narrow and the gaps too wide for him to jump up and sit beside me. He let me pick him up (let me pick him up!) to sit on my lap, four times! I’m still amazed. He’s been here all this time, and I’ve never picked him up. I’ve practiced lifting his chest, lifting his feet, but he’s never been ready to completely leave the ground.” (7/1/2021) Update from John’s foster mom – “John will jump up to lay on my lap in the recliner without coaxing and join me on the couch. He has officially started coming to me for treats and pets if the other other dog and people activity is fairly quiet. I am not sure if I ever mentioned his shadow behavior, as he’s been staying close since we started walks several months ago. When we first started going to the dog park he would only go where I go. He’s been following me around the house, inside and out, for a long time, but always just out of reach. He now will come close enough, and not back away, for me to reach down and pet him in passing.” (5/21/2021) Update from John’s foster mom – “John has been fostering at my home for 7 months. He has come a long way toward becoming a good pet but is still ruled by his fear. He is good around every type of animal. He is very afraid of children and people who move fast or talk loud, running away is his first defence, but he may try to nip if he is cornered (or if he thinks he should protect me). He has bonded with me; he loves to go for walks and car rides. He spins in circles and squeaks, a lot, every time I return home. He’s funny about playing and he wants to do it in secret. When he catches you peeking, he’ll act like nothing was happening. He will not come to me, not for treats or pets, not even when he’s excited to see me. I can now sit next to him on the couch and pet him or give him treats without him running away. For leashing, he has to put himself in his kennel or on the couch – he wants it, but he feels he has to run from it first. While leashed, I can guide him to share a recliner with me for socializing time, and he’ll frequently fall asleep on my lap. It may take him a while to trust you, but once you have his trust he will melt your heart.” 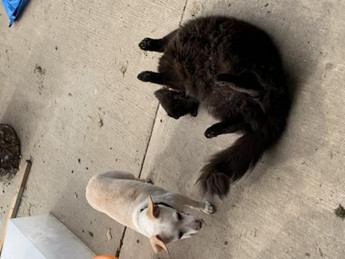 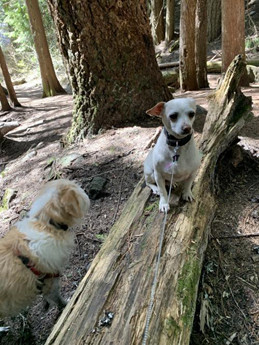 Vaccinations up to date