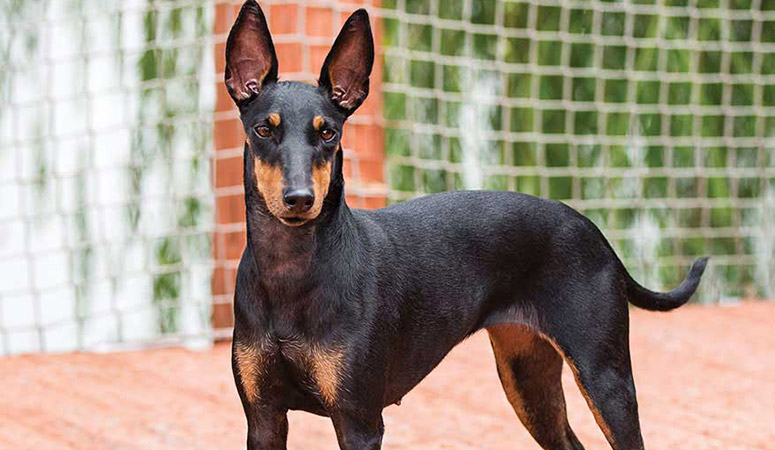 The Manchester Terrier is named after the English city where much of the breed originally developed, and they are early used for ratting and rabbit coursing. This sleek, racy dog comes in to two size varieties: Standard (not exceeding 22 pounds) and Toy (not exceeding 12 pounds). 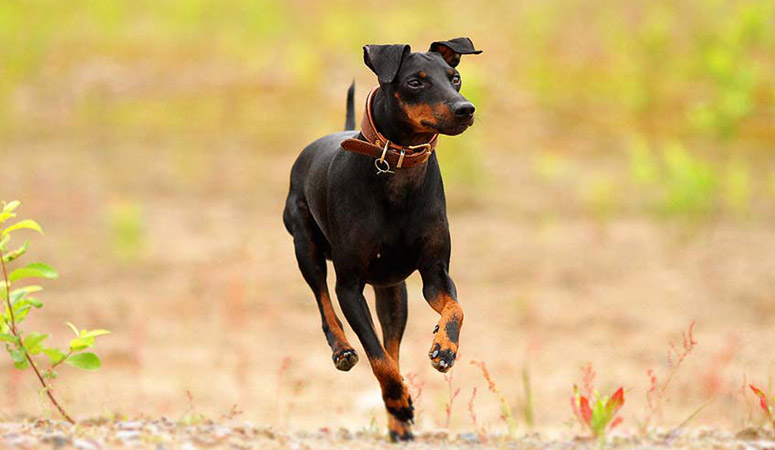 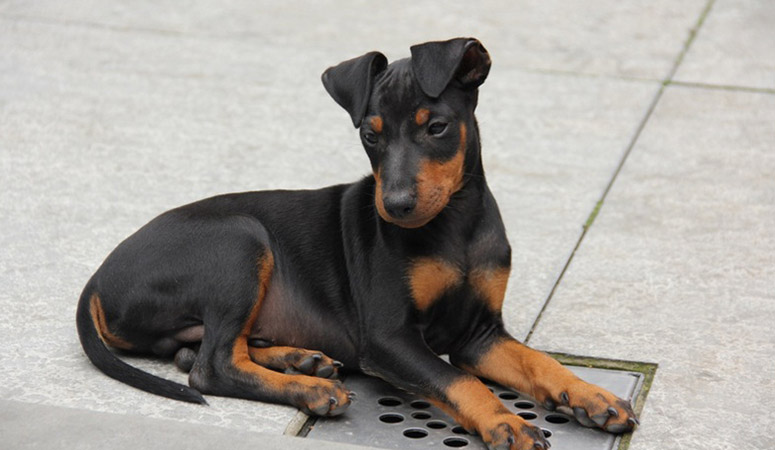 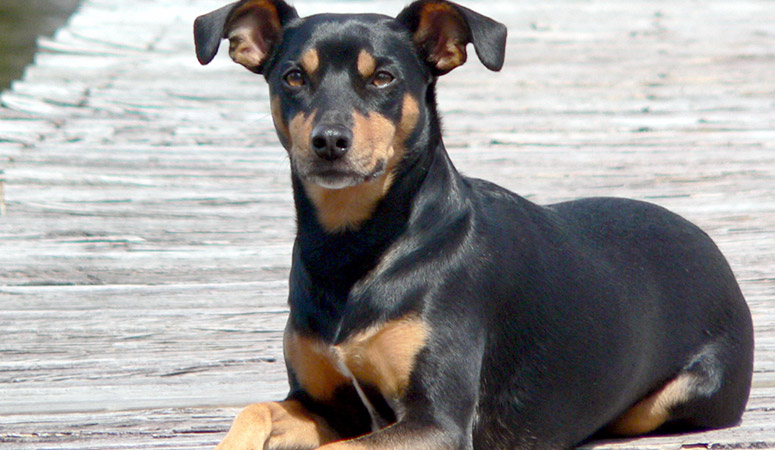 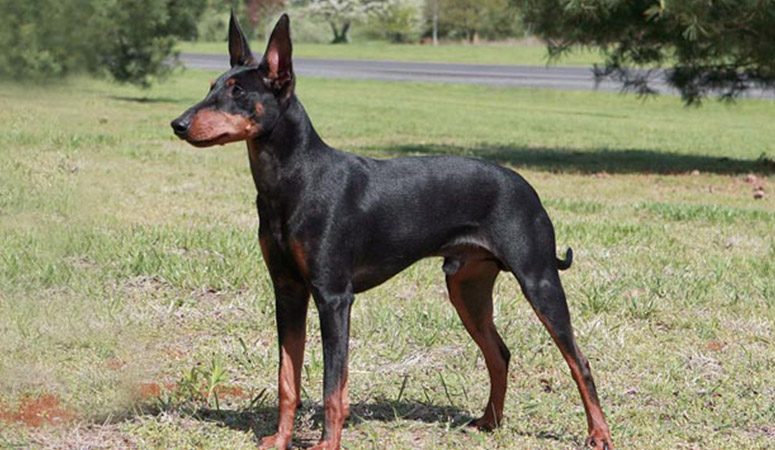 He is lively and spirited, the Manchester Terrier. Some say he reminds them of a miniature Doberman pinscher. He’s got heaps of personality to burn which makes him an excellent watchdog – he’s exceptionally loyal and observant. He stands about 16 inches at the shoulders and weighs around 22 pounds. This dog is a totally devoted pet for companionship and won’t do well without his owners around him – children need to be taught not to yank at his ears and act like he is a toy; he can’t handle that abuse. If he is anxious and unhappy, he can become snappy and will dig holes and present with destructive behavior through no fault of his own.  He needs a lot of activity and exercise, socialization, and training to turn him into a wonderful companion and friend, and he learns quickly too. Their coats are short, which means they should not be left outdoors. Outdoors, their black coats can cause them to overheat in summer and in winter their short coats can leave them feeling chilled. You need only brush their coat once a week to get rid of dead hair and prevent matting.

The Manchester is a very easily maintained dog, weekly brushing with a rubber or bristle brush to get rid of dead hair and prevent matting and wiping him down with a damp towel or a hound glove is helpful to keep his coat shine. Also, it is necessary to give your dog a bath with a shampoo formulated for dogs to keep him looking quite dapper.

Brush your dog’s teeth at least two or three times a week to remove tartar buildup and the bacteria that lurk inside it, daily brushing is better to keep fresh breath and prevent gum disease. The rest is to trim the nails as needed, usually once every few weeks.

Active, swift, and athletic, the Manchester requires daily exercise and mental stimulation at least half an hour every day, this can be in the form of walks, running, disc games, obedience, or agility. It is not suggested to hang out your Manchester alone in the backyard for exercise, even if that’s what you intended, your dog will spend the time waiting at the door asking to be let back in.

And this breed enjoys traveling and would be very happy to go with his family on whatever errands they have in store for the day. Whether it’s a trip to the park or shopping at the pet store, the Manchester Terrier will be happy to tag along.

Generally, it is recommended to feed the Manchester Terrier with a half to one cup of high-quality dry dog food every day, divided into two meals. And there should be clean and fresh water at all times. More importantly, the food amount should depend on the dog’s weight, size, age, and activity level.

Some dogs are easy to get overweight, so you need to watch their calorie consumption and weight level all the time. Treats may be an important aid in training, but excessive intake can lead to obesity. Also, owners need to distinguish which human food is safe for dogs and which are not. If you have any problems with your dog’s weight or diet, just consult from your veterinarian.

Manchester Terriers are eager to learn, but sometimes they are also a bit stubborn and distracted, so it is required patience when training. They can learn basic commands in due course when the training is fun and consistent. And it is suggested to use positive reward-based methods as they enjoy pleasing their owners. They don’t react well to harsh corrections, so it is useful to keep your training session fun and filled with lots of effusive praise for jobs well done.

Also, they can benefit from advanced obedience training and dog sports as these activities keep them mentally and physically challenged. And they are excellent candidates for a variety of dog sports including obedience, rally, agility, lure coursing, barn hunt, earthdog, tracking, flyball, scent work, and even freestyle dancing.

The Manchester terrier originates from England. He is considered to be the oldest of all identifiable terrier breeds; thought to date back to the 16th century. They were bred to keep rats at bay in the country inns – some inns would even keep kennels of the Manchester Terriers and after closing up time at night, would set them loose in the dining halls to catch rats.

They built up a reputation as having a great fiery spirit and determination, facing any foe that was twice their size.

What about Tiny the Wonder, the star attraction? He was a Manchester terrier in the 19th century; he could kill 200 rats in an hour. He was so tiny; he wore a woman’s bracelet around his neck like a collar. He weighed only five-and-a-half pounds.

In England, Manchester District was the center of breeding for these terriers, that’s why they got that name. Very small Manchester’s that were bred with Chihuahuas were very popular when some members of the public were looking for even smaller dogs. Some owners had leather pouches to put these dogs in. When they rode their horses the dogs got the nickname of “Groom’s Pocket Piece.”

In 1937, the British Manchester Terrier Club was formed, and fortunately, its members managed to save the breed from extinction after World War II.

The dogs were imported to America with the American Kennel Club recognizing the Toy breed in 1886 and the Standard breed in 1887.

Other Breeds in Terrier Group